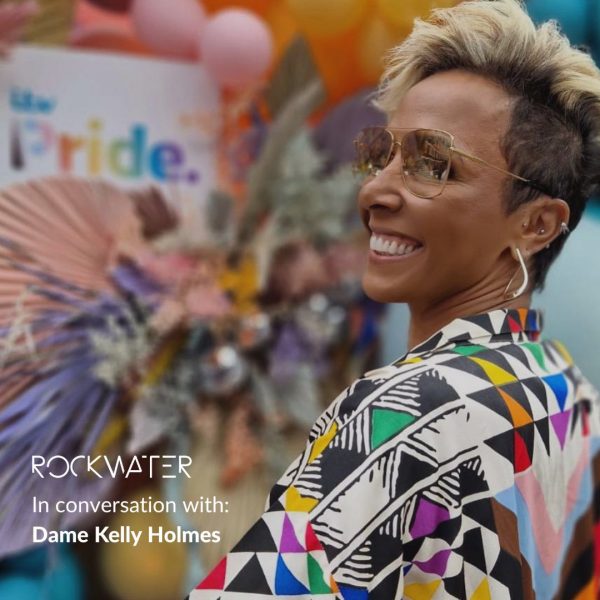 On Thursday 11th August, we launch the inaugural Rockwater podcast and are thrilled to be joined by Double Olympic Champion Col. Dame Kelly Holmes MBE (mil) as part of her ‘Being Me Podcast tour’ 🎙️

Dame Kelly is one of Great Britain’s most loved and respected athletes. She made history in the 2004 Olympic Games in Athens when she became the first British female athlete to win both the 800m and 1500m. Before becoming a professional athlete, she was a physical training instructor in the British Army, a role she is immensely proud of. In 2005, in recognition of all her achievements, she was appointed Dame Commander of the Order of the British Empire (DBE) and was subsequently made an honorary colonel with the Royal Armoured Corps Training Regiment in 2018 which was signed off by The Queen.

In June this year, Dame Kelly came out as gay and released a beautifully poignant and deeply personal documentary, “Being Me” in which she talked about the difficulties she faced in opening up about her sexuality and the impact that had on her mental health. Her honesty, bravery and determination to overcome has been inspirational to so many and cemented her place in the nation’s hearts. She joins us to talk about life, mental health and being Dame Kelly.

Today Kelly is an Global Inspirational Speaker, an award-winning author, an entrepreneur as well as a fitness, wellness, and mental health champion. Kelly is passionate about raising awareness of mental health. Her own experience led her to learn more and to help others. A trained Mental Health First Aider she continues to be President of the charity she founded in 2008, Dame Kelly Holmes Trust – a charity which supports disadvantaged young people using the unique skills of world-class athletes to engage, enable and empower.

Proceeds from all ticket sales will be donated to the Rainbow Fund, a Brighton and Hove based grant-giving fund for local LGBT and HIV/AIDS organisations 🏳️🌈